If you don't, then it is under the "mfi" driver and it is a RAID card.

These cards often come without brackets or with a low-profile bracket to fit into 2U rackmount servers. Getting a proper bracket is recommended.

Directly attached drives look just about the same, just fewer of them: You can hit control-C during that to get to the card configuration utility. Shows you the adapter type and firmware revision. 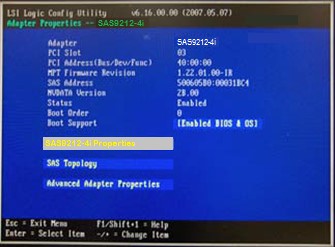 Note firmware version 15 and IT mode. You can look under SAS Topology at your attached disks, but really there's not a whole lot to be seen HP LSI Logic 1068e SAS in IT mode. Within FreeBSD, that'll probe as a controller serviced by the mps driver, and the drives will appear as normal "daX" devices and appear in "camcontrol devlist", so pretty straightforward pleasure there.

A "dmesg grep mps" would show something like: And so far, things like hot adding HP LSI Logic 1068e SAS drive seem to work fine. It has been a very pleasant and flexible controller to work with, as we use them with ESXi in -IR mode as well. Aimed at high performance and high availability applications, they tend to have more ports, cache, perhaps battery for the cache, and options for managing and configuring the array.

Some will like and others will take issue with the PCIe x8 connector, mostly based on motherboard slot availability. Simply put, this combination is one of the best values for connecting masses of SATA disks to a system where raw performance is not an issue.

Another really amazing feature of these cards is their MTBF numbers. Just for a point of reference, the Adaptec is rated athours.

As a result, higher-end hardware RAID features are absent from these controllers. Power off your server module and then power it back on.

The BIOS screen appears. The first screen of the utility appears after a short delay.

The main screen of the utility opens. The next screen allows you to choose the type of RAID. Select the type of volume you want to create, in this case an IME volume.